“As Big as the Storm” is a celebrated song by country singer-songwriter and native Houstonian, Max Flinn.  The song paints the picture of Houston after Harvey and the incredible display of courage and compassion shown by fellow Texans as well as Americans from all over the country.  The song has been praised for its smooth vocals over beautiful instrumentals and its compelling, powerful lyrics.

The project has grown into an ongoing collaborative effort to help the people of Houston recover from the worst natural disaster in our nation’s history.  Many families lost everything they own and much of the damage was uninsured.  100% of proceeds from donations, iTunes downloads, and T-shirt sales are going to Harvey relief efforts.

Contributors to the project include a who’s who among the Houston and Texas country music scene.  In addition to Max on lead vocals and acoustic guitar, the song features Jody Cameron on pedal steel, Stephen Snoe on the fiddle, Chad Ware on electric guitar, William VonReichbauer on the upright bass, Travis Bishop on keys, and Chris Ardoin on drums.

The song was mixed and mastered by Lyndon Hughes in the famed Houston studios of Stormy Cooper Media, producer of many Texas #1 hits.

We humbly offer this song as a gift to the people of Houston and we hope that it may bring inspiration to those who are still suffering.  Thanks to everyone who helped in our time of greatest need and thanks for your continued support.  You are appreciated. 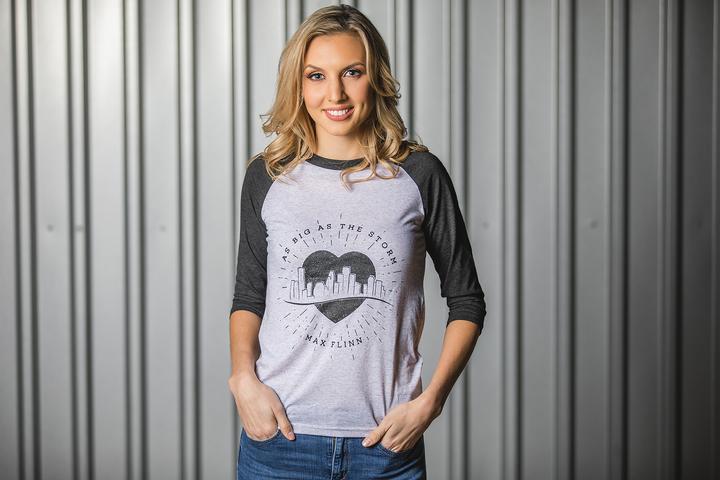 State of Houston Co is proud to be the official distributor of shirts for this special project.  All shirts for “As Big as the Storm” are printed on premium blended fabric, with relaxed fitting and light-weight material. These shirts are sure to keep you cool, especially during the Houston summers. See them in the online shop.